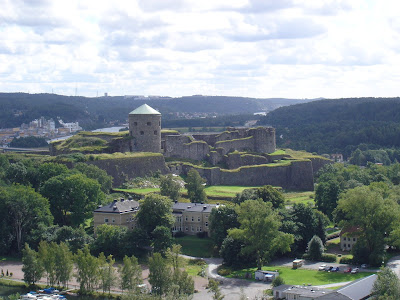 This is a file from the Wikimedia Commons, License


Unfortunately, it is unknown, when Kungälv, or Konghelle was founded. However, Konghelle appears in the Icelandic sagas and the famous storyteller Snorri Sturluson actually visited the town himself. It is believed that Konghelle settlement existed already in the 9th century near the river with rich agriculture. In the beginning of 12th century, the Norwegian King Sigurd I Magnusson (Sigurd Jorsalfare/Sigurd the Crusader), who reigned AD 1103 – 1130, favored Konghelle and used it as the capital of Norway and an important power base.

The construction of Bohus Fortress began in 1308 under King Haakon V Magnuson, King of Norway, who reigned AD 1299 – 1319.
In the beginning of 14th century, there was a power struggle between the King of Sweden Birger Magnusson (who reigned AD 1299 – 1319) and his brothers, the Dukes Erik and Valdemar, all sons of King Magnus III Ladulås of Sweden. Duke Erik was married to Ingeborg, daughter of Haakon V Magnuson of Norway, and thus had strong ties to the Norwegian monarchy. Due to the marriage, Duke Erik gained control of Ragnhild Holmen castle, which was built in the 13th century. The castle was on an island, opposite Kungahälla (today, you can find only the ruins of the castle of Hisingens beach, in Gothenburg). Ragnhild Holmen became an important base for the Dukes Erik and Valdemar, who once controlled large parts of today's western Sweden.
The power of previous alliances had been undermined and the Norwegian King Haakon V Magnuson wanted the son Erik would give back their fiefdoms. The Duke refused, and a siege of Ragnhild Holmen castle began. Håtuna games and Nyköping Banquet are two known events in the power struggle, which had the character of a Nordic civil war.
According to the Swedish Erik Chronicle, in 1308, Count of Northern Halland Jacob Nielsen urged the King of Norway to build a fortress on the high cliff where the Göta River divides. This allowed Duke Erik's opponents take control of communications to and from Ragnhild Holmen. As a result, the superior strategic position of Ragnhild Holmen castle very soon had outlived its usefulness.

In the beginning, the Bohus fortress was built of the tree. However, since the fortress was located in the border region, then soon it was rebuilt in stone, and it has become one of the strongest fortresses in Scandinavia. The first commandant of Bohus ruled the south, and later the northern part of the province, which later received the name of strengthening Bohuslän. Bohus played an important role in the relationship between Norway and Sweden. In 1333, in Bohus, had been herredag (the Privy Council), where King Magnus Eriksson was declared of age. In 1344, here, the son of Magnus Haakon was proclaimed king of Norway. In 1389, the fortress was the place, where was held in custody King Albrecht of Mecklenburg.
In the Middle Ages, the fortress was besieged numerous times, but it was never captured. In 1531, it was besieged by the Danish King Christian II. During the Northern Seven Years' War (1563–1570), Swedish soldiers unsuccessfully tried five times to capture it. The most serious challenge to the siege of the fortress began in March 1566, when Niels Boye and Nils Sture took four attempts to assault. During the last attempt, 250 Swedish soldiers successfully stormed and occupied the northeastern main tower. The Norwegian commander sent a volunteer to blow up the ammunition stores underneath the tower, killing the Swedes and repelling the attack. As a reward, the family of the volunteer got a piece of land which is still in property of the descendants of this volunteer. 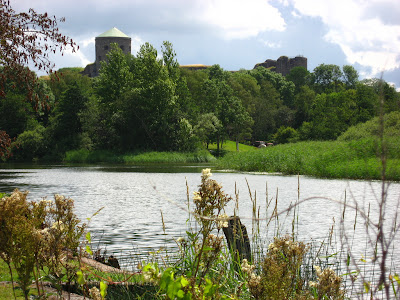 This is a file from www.flickr.com, Author: ruminatrix


The Norwegians rebuilt the fortress (strongly affected by the siege) of stone and brick, and substantially reinforced it. The reconstruction immediately after the war was directed by Hans Paaske (Påske) from the Netherlands.
In 1593-1604, similar to the construction then undertaken at Akershus in Oslo, Bohus was upgraded to a bastion fortress. A new outer fortification was raised. This construction was one of the early works by Hans van Steenwinckel, also from the Netherlands, who was later famous for his Dutch Renaissance style design in Denmark.
Since in that period the Norwegian Båhuslen continuously threatened of Swedish invasions,  then  the improvements to the fortifications continued for years. For example from the summer of 1651 through the autumn of 1652 the Dutch engineer Isaac van Geelkerck directed the construction of two corner towers along the south face, as well as the construction of a new wall around the arsenal building.
In the middle of the 17th century, the fortress was a rectangle with towers, north-west of which ("Fars hatt") was rectangular, and the remaining three, apparently circular. In the western part of the fortress stood "Red Tower", in which the church was located. The outer fortifications of the castle were formed as irregular heptagon.
Under the terms of the Treaty of Roskilde in 1658, Denmark–Norway ceded to Sweden the Danish provinces of Scania, Blekinge and Halland and the Norwegian provinces Trondhjem and Bohuslän (including Bohus Fortress). During the Danish-Swedish War of 1675-1679's fortress was besieged again by ten thousandth Norwegian army under the command of Gyullenleve. The castle would have been forced to capitulate, if the forces of G.O. Stenbock did not come to the rescue. The almost totally destroyed fortress was rebuilt according to the plan of engineer Eric Dahlberg and until 1700, it was the residence of Bohuslän governor.


After Denmark-Norway ceded the territory which included Bohus Fortress, Fredriksten Fortress was constructed in Fredrikshald on the newly established Norwegian-Swedish border. Bohus Fortress was not longer located on the border and it was used by Sweden minimally. Under the King Charles XII, the fortress cannons were transported to Sundsborg that, according to the plan of the king, was to strengthen the border to Danish Norway. After the death of the King, the cannons were returned to the castle. In the 18th century Bohus castle served mainly as a prison.
The most famous prisoner was the radical pietist Thomas Leopold, who during his life spent 42 years behind bars (32 years at Bohus castle prison) for his alleged heresies. His stone cell can be visited at the castle today.
At the end of the 18th century it was decided that the now unused fortress should be demolished. Demolition crews worked at the fortress for two months, at which time the money allocated for the task had run out. Residents of the surrounding town of Kungälv used the dressed stone of the fortress for building houses. However, much of the fortress is still intact, including the large northern tower, "Fars hatt". In 1898-1904, in the fortress were conducted archaeological excavations and conservation work. In 1925, the ruins of the Bohus fortress taken over by the building management, and in 1934, under the guidance of the Commission on Unemployment, the restoration work was began. During the restoration work, were restored main gate, which is now decorated with the monogram of Gustav V.
Currently,  the restoration work continues in the castle. The fortress is now a museum and open to tours in the summer.

In the preparation of this article, were mainly used materials of websites: www.wikipedia.org, www.bohusfastning.com and www.flickr.com
Автор: Unknown на 4:14 PM 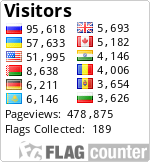